There’s a brand new group fitness studio in town with a piece of equipment that I guarantee will surprise you and make you sweat (hint: it’s a self-propelled treadmill that is permanently on an incline!)! I was lucky enough to bring in the sweat and repeat crew in for a killer class at RETROFIT. While RETROFIT has existed as a gorgeous personal training space since 2009, they recently opened up a group training area to offer their unique technique and holistic approach to more people.

Each of their four classes is 45-minutes long and we were treated to the signature HIITX (they also offer Sculpt, Burn, and Cardio). The room is broken down into ten stations with two people at each station. You complete one minute at each station with 15 seconds to rotate in between stations. Once you have completed all ten, you take a short break and then go through twice more. Some of the stations change a bit each round while others stay the same. Our stations included:

While there may be studios out there with a similar format, the high number of cardio stations is very unique and really helps to get your heart rate up for a majority of the class.

Once we were done with three rounds, we stretched as a group. During this time, instructors are encouraged to add in some opportunities for learning. Christian spoke about the importance of nutrition, emphasizing that no matter how hard you work in the gym, if you don’t do the same in the kitchen, you won’t see results.

After class was over, we enjoyed treats from Siggi’s Dairy and Perfect Bar along with smoothies provided by the cafe at the front of the studio.

Interested in attending a class at RETROFIT? You can find their schedule here and pricing here.

Los Angeles truly does have the most unique workouts—something that I appreciate more every time I exercise in another city. From machines that simulate climbing to vibrating plates, they sure do know how to keep it interesting around here.

END_OF_DOCUMENT_TOKEN_TO_BE_REPLACED

I’m seriously embarrassed and kind of sad that it took me almost two years to get the courage to take a class at Prevail—one of everyone’s FAVORITE boxing studios in LA. I giggle a little too much to even take myself seriously while I’m wearing the gloves. I decided to finally take the plunge and signed up for class.

END_OF_DOCUMENT_TOKEN_TO_BE_REPLACED

This weekend, some ClassPass friends and I all jumped in the car and headed an hour south to the land of pristine streets and perfectly trimmed palm trees: Orange County.

ClassPass teamed up with one of the most popular fitness studios in the area, The 12 Movement, for a killer workout complete with some post sweat treats.

We arrived to the studio and I was surprised that it was half gym, half fitness studio, kind of like Reebok Cross Fit Lab in LA. They showed us the women’s locker room complete with four showers and complimentary towels. After stashing our things in the lockers (make sure to bring a lock!), we headed into the room where the class would be taking place.

Stepping into the studio made me panic a little…I was here for an event not so much a killer workout; joke was on me! There were free weights, weighted balls, treadmills, trx-style bands, stationary bikes, and giant parkour style boxes spread out throughout the room. Written on the mirrors were fun words like “burpee” and “sprint”. 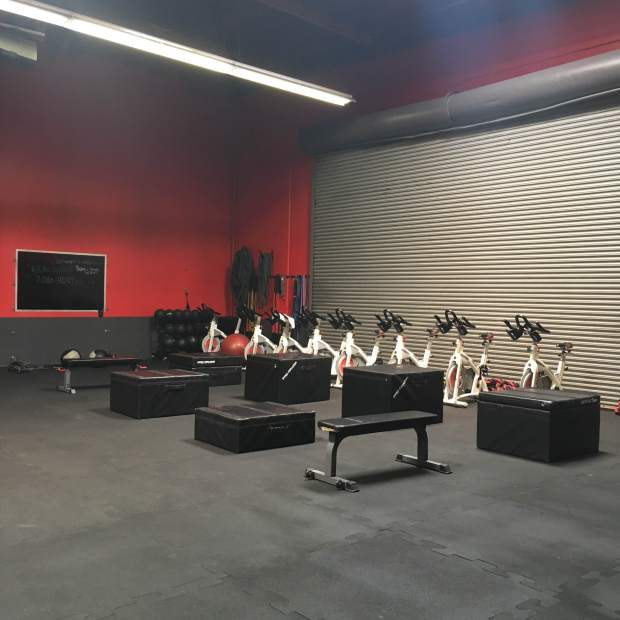 Our instructor, Ryan, was motivating from the get-go, giving us some insight into his training (he’s been stationed overseas in the military a few times) and his past (including when he was in an accident and woke up paralyzed for four months only to be told he may never walk again). Listening to these stories helped push the fear out of my head and prepare for one tough workout.

Ryan led us around the room explaining each of the stations before we broke into groups. Similar to Training Mate, the class was separated into seven stations with two exercises per station. We rotated between each exercise for 40-seconds six times before moving to the next station. Some of the workouts included sprinting on an incline, pedaling up a hill, burpees, tricep dips, and wall sits while passing a weighted ball.

Once the class officially started I loved how Ryan continued to offer motivation as he circled around the room hyping everyone up. Although the moves were tough, 40 seconds was completely doable.

We ended class with one more cardio blast as a team and then headed into the lobby to taste juice by Project Juice and shop clothing by Reva Wear. My fellow ClassPass pals and I fell in love with the black and white striped jacket and will now be #twinning around town. You can shop our look here. 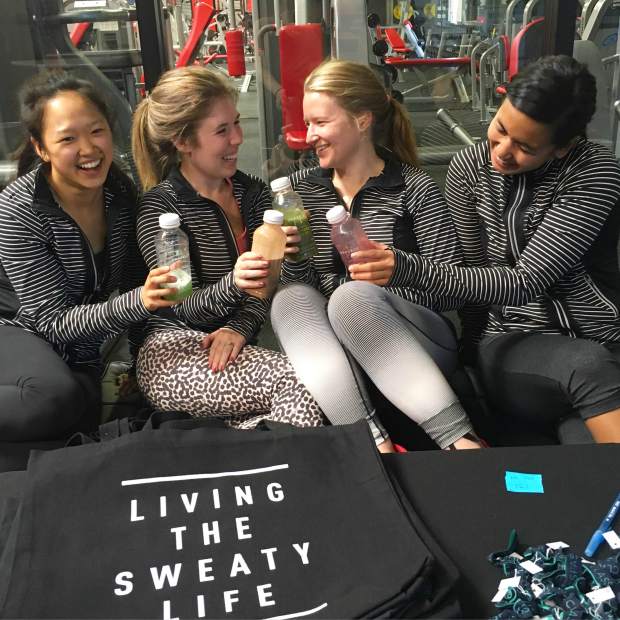 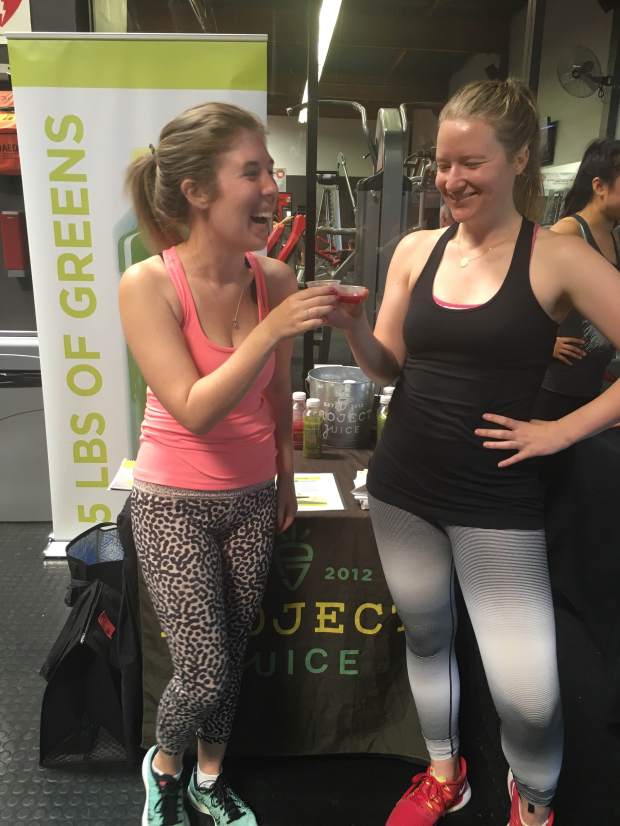 Post class we treated ourselves to some fancy soup filled dumplings at the South Coast Plaza Mall…the mother of all malls! It turned out to be the perfect Saturday!

The popular and effective Eagle Rock workout, completeBURN, is finally moving west and setting up shop at the swanky Mondrian hotel on Sunset Blvd. in West Hollywood.

I had a chance to attend the media preview on Tuesday and have had trouble walking ever since. CompleteBURN, created by Leah Purcell, is a high intensity interval-training program that uses bodyweight, kettlebells, and a stability step with resistance band to torch calories and skyrocket your heart rate.

Although we were going through a shortened class, I was dripping sweat about two minutes in and it never slowed down. Our class sampled each of the three classes that will be offered: power bodyweight, power weighted, and core.

END_OF_DOCUMENT_TOKEN_TO_BE_REPLACED

While Los Angeles is blessed with so many great places to workout, I always feel like New York City is one step ahead of us. Thankfully, the new trend is for NYC based studios to head west and set up shop where blizzards are less likely to prompt a class cancellation. Enter: the opening of Uplift!

END_OF_DOCUMENT_TOKEN_TO_BE_REPLACED

There’s a brand new studio in the heart of Hollywood that happens to be literally across the street from my apartment. It doesn’t get any better than that! Oh wait, it does… Not only do they offer classes like barre, TRX, and hot yoga, they also have amazing amenities that encourage studio go-ers to stay forever.

END_OF_DOCUMENT_TOKEN_TO_BE_REPLACED

I’ve been dying to check out Burn60 since they opened last month so I was thrilled when the ClassPass ambassadors were asked to host an event at the studio! Burn60 is a Brentwood favorite that has expanded to West Hollywood.

END_OF_DOCUMENT_TOKEN_TO_BE_REPLACED

Basecamp prides itself on being an in-and-out workout that challenges you during every second. While most studios have 60-minute classes, Basecamp classes run 35 minutes long with an additional five minute core section at the end.

END_OF_DOCUMENT_TOKEN_TO_BE_REPLACED

Alright ‘Sweat and Repeat’ readers, you caught me wrap-handed! I’ve avoided writing this review because Robot Fight & Fitness is one of my favorite studios and I didn’t want the secret to get out! A couple years ago, way before I started my ClassPass adventure, I walked into ‘Robot’ and secretly hoping it was a film company with a similar name.  To my surprise it was full of people working out and fighting. Overwhelmed and nowhere near the motivated ClassPasser I am now, I ran out as quickly as I came in! Now, I love it, and can’t wait to tell you more.

Robot Fight and Fitness has one of the largest mat spaces in Los Angeles (3000 sq. ft.) and can have up to four classes going at a time. The facility also includes an Olympic lifting area and a ring for practice matches. While most people look to ‘Robot’ for MMA, Muay Thai, and BJJ training (it’s a great studio for beginners and the instructors are amazing), I think I’ve found my home at Robot Fit classes. Robot Fit is a strength and conditioning program, the studio’s alterative to Crossfit without the injuries associated with that style of workout.