I’m seriously embarrassed and kind of sad that it took me almost two years to get the courage to take a class at Prevail—one of everyone’s FAVORITE boxing studios in LA. I giggle a little too much to even take myself seriously while I’m wearing the gloves. I decided to finally take the plunge and signed up for class.

Since I went to a noon class, I found neighborhood two hour parking down the street, however it is permit parking before 8am and after 6pm. In that case, parking can be very challenging. I signed in with the front desk, filled out a digital waiver, and wrote my name on the white board for new people.

They provided me with free wraps and gloves but after the first class they’re $5. The assistant for the class called out my name and wrapped my hands to prepare for class as we chatted a bit about my nerves and he reassured me that I would survive. There are lockers in the lobby (they don’t lock but I assume you could bring your own). 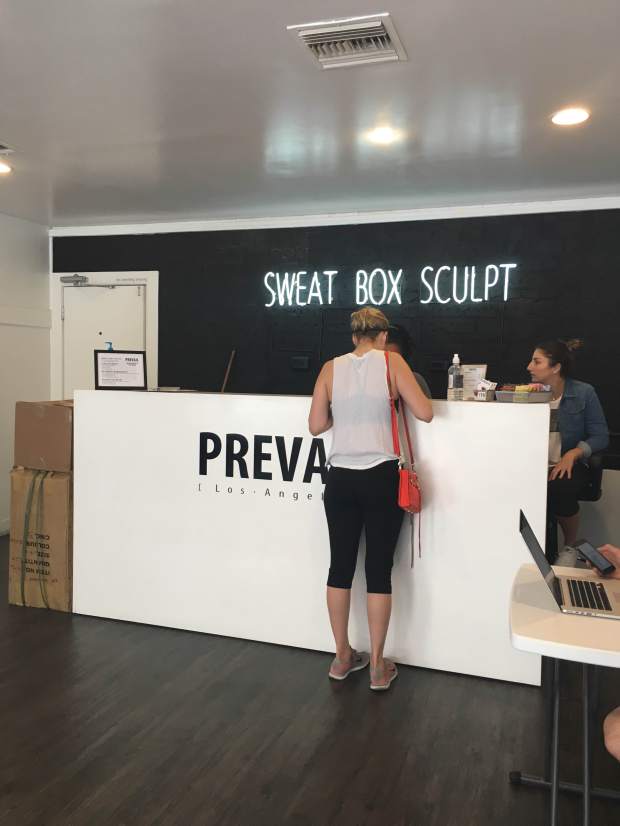 I headed into the studio and it was definitely smaller than I anticipated. One wall was lined with bags, the other with a mirror, and tape lined the floor to section off four areas. We started with a cardio warm up running, skipping, and side-shuffling back and forth. Then we learned our boxing routine of the day—jab, cross, jab, weave (aka duck to avoid punch), cross, cross.

The instructor, Vicky, went over each of the six stations while the assistant demonstrated them: 1. Punching the bag/cross hook 2. Practicing routine of the day 3. Russian twists/heel touches 4. Practicing routine with instructor/assistant 5. Plank army crawls 6. Jump squats and squat holds. We did each station for a minute and went around three times.

Once that was over we paired up and did twelve minutes of “conditioning”. This included pushups, squats, crunches, burpees, and ended with a one-minute plank hold.

There was no stretching at the end but some people did stay around to stretch themselves. Since we were moving so much and there were a variety of components to the class, the workout seriously flew by—perfect for anyone who gets bored easily. I loved how the instructors were always positive and encouraging even when I kept forgetting the routine. Although it’s a competitive class to get into on ClassPass, I will definitely be back!

Fun fact: Prevail is across from the Pallazo apartment complex, which is where Lauren Conrad lived on The Hills. Prevail is also blocks away from Trader Joe’s, Coffee Bean & Tea Leaf, and The Grove.

2 thoughts on “SWEAT at Prevail”