I hate looking awkward during a workout and boxing never fails to give me an uneasy feeling. At the Nike event a couple weeks ago (one of the best nights of my life, seriously), I was put into the class run by Prevail. Two days later, I dabbled in some uppercuts with my Fitspot trainer, James. I was feeling more confident about my technique so I signed up for Box & Tone.

While all of the parking in the ground level lot is 20-minute, there is an underground garage beneath the entire shopping center (entrance is in the corner). I found a spot easily and took the elevator to the second level. The entrance to the studio is across a little bridge over the lot. I checked in, signed my waiver, and filled up my water bottle. The studio has two rooms—one for their signature treadmill and tone classes and the other for spin. While waiting in the lobby until the previous class got out, I started to get a bit nervous seeing everyone come in with wraps and gloves. Being a newbie to boxing, one of my biggest fears is to be the only beginner. 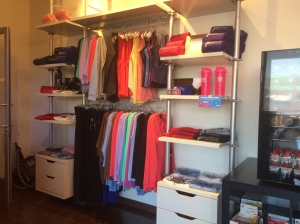 Once the previous class finished, everyone rushed into the studio. I didn’t know if we were rushing to the treadmill, the gloves, or the lockers in the corner, and I couldn’t tell who the teacher was right away—my nerves were getting worse! Finally as the room settled, I took a hint and grabbed a treadmill. We started jogging but then Sue had new people move to the floor instead of doing the cardio warm up. Roger, her husband, was leading the floor warm up where we started learning different punches and footing positions.

When the warm up was over, we all grabbed sets of 5 lbs. weights for the “tone” portion of class. Since it was a big class, some people had to modify and use resistance bands. We worked only our arms doing curls, tricep extensions and kickbacks, overhead presses, punches, and arm raises.

Next came the boxing portion of class. There are gloves to borrow, which I took advantage of, but man do they stink. They’re all stuffed with dryer sheets but I honestly think that made the smell even fouler. We practiced our stance along with four different punching moves. The instructors would yell out a combo and we would quickly answer with our movement. A few sections were done with a partner, alternating who was hitting whom. We also spent some time in a line quickly practicing combos on ten (ish) punching bags—and two dummies.

The class went by so quickly because we were always busy—never doing anything for more than a few minutes before moving on to the next activity. The instructors were giving lots of positive reinforcement and correcting form. We ended class with a group stretch but many of the people were sticking around for the purely boxing class afterwards. 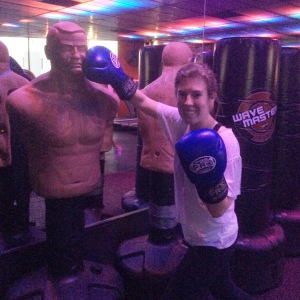 Take advantage of the two hour parking and swing by the Urban Outfitters surplus store, Buffalo Exchange, or TJ Maxx to score some discounts. For a cold pressed organic juice or acai bowl, head two blocks west to Juice Crafters. If you need something a bit more substantial to eat, check out Crave Café, Chipotle, Supmoni (reasonably priced Italian), or VeStation (organic vegetarian), all within walking distance. Killed yourself in class and need a real treat? Walk right downstairs to K’s Donut Emporium.

One thought on “Box & Tone at Pulse Fitness Studio”