Flash tats, body paint, crop tops, glow in the dark bracelets, music blasting, people jumping. The drug of choice is caffeine and partiers are chugging drinks thickened with chia seeds. It’s dark outside, but not for obvious reasons. Nope, it’s not midnight. This rave is happening before the crack of dawn and it’s unlike anything you’ve ever seen. 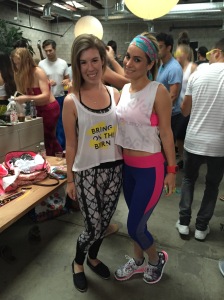 With Saara, the founder of Fitness4Purpose

Daybreaker is an early morning dance party that originated in NYC and is making it’s way across the world—including cities such as Amsterdam, Tel Aviv, and Hong Kong. I’ve been dying to go since it came to LA, but couldn’t convince anyone to join me in setting an alarm for 5:30 AM so when Saara, the founder of Fitness4Purporse, reached out, I couldn’t say no.

Fitness4Purpose is a fitness challenge fundraiser that brings people together to explore a variety of workouts throughout LA while supporting a good cause. With their first challenge starting July 19, 2015, a group of 15 people set out to workout for 22 days straight and raise $35,000 to build a school in Nepal with the nonprofit organization buildOn. From Orangetheory to Aura Cycle, Hot8Yoga to Barry’s Bootcamp, these motivated individuals will sweat with a purpose.

Daybreaker started at 5:30 AM with a one-hour yoga sesh that I opted out of. The real party was from 6:30-8:30, ending right in time to make it to work. This one took place at The Springs in DTLA and I was so excited to join despite not knowing anyone there. I checked in and met up with Saara outside who immediately took me under her wing and introduced me to the Fitness4Purpose team. They were all so welcoming and treated me like one of their own as we broke it down on the dance floor together. We raved to beats by DJ Dan and sipped on beverages by Groundwork coffee, Icelandic, Just Chill, Hint, and Mamma Chia. It was sweaty, exhilarating, exhausting, and energizing all at once.

Fitness4Purpose will be sweating around town until August 9th and I hope to be able to meet up with them at another inspiring workout!

Interested in attending Daybreaker? Sign up for the mailing list to see where the next rave is located. Usually there are two a month in LA, one downtown and one on the west side.